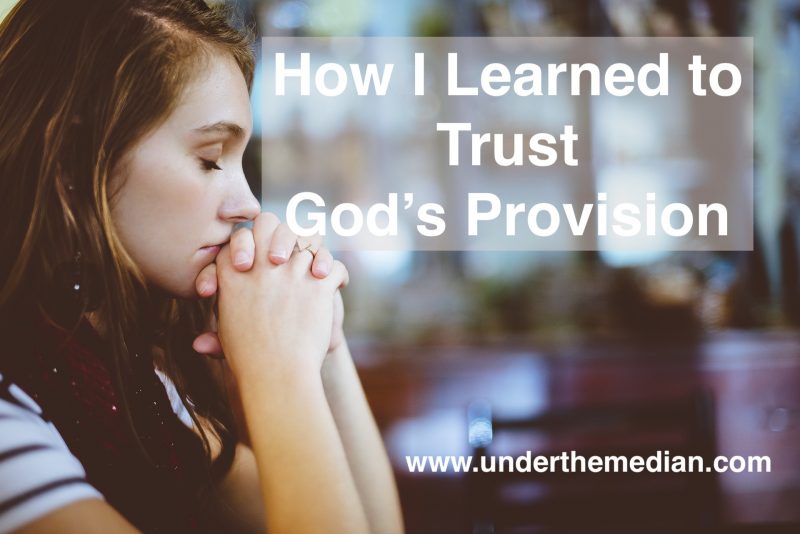 I’ve been married for 31 years. That means I’ve had a good deal of experience in doing what our family calls, “praying in”. Raising children on a salary which was nearly always under the national US median income, came with a fair share of times when we really didn’t have the money for anything extra. That’s when I would look at my kids and say, “Honey, we’re going to have to pray that in.” They knew that meant that we were going to hit our knees, take our petitions to the throne of heaven, and believe God to provide an answer.

I’d like to give you four examples of God’s provision throughout the years. Although, believe me, there are many more that I could share. I hope that in the telling, you will be encouraged in your own life walk. I know it’s not easy. I’ve been there, made hard choices, and lived my life counting nickels and dimes. But, I want you to also know that there is also great joy in the journey as you see God provide again and again.

1. Never doubt that God cares about your desires.

In late 1987 my best friend had proposed marriage to me. I accepted. We had known each other for 5 years, meeting when I was just 18 years old and he was 25. We were young, in love, and flat broke! Seriously! Between the two of us we could only have scraped together maybe $300.

Since we were paying for the wedding, simplicity was the order of the day. It was to be the Pastor’s study and a guest list of 10 people. I didn’t really mind. I just wanted to be married.

As the date neared, Larry’s parents offered to pay for a wedding cake, punch, and rent the church hall if we wanted to invite more people. Truth be told, Larry had a very close knit family. He was finally “tying the knot” at the age of 30 and they wanted to be present to cheer loudly when the pastor said, “May I present to you Mr. and Mrs.”. We gladly accepted their generous offer. We wound up with a guest list of a little over 100 people, all of whom we personally called and invited, because we had no money for invitations. But, now, at least, I was having a proper wedding. Except for the dress.

I became more than a little bummed that I was going to wear a simple dress that was already hanging in my closet. I wanted a wedding dress. So, one night, I cried my heart out to God. I told Him how disappointed I was that I would not wear a traditional white gown at the ceremony. I asked if there was any way that He could provide a wedding dress for my big day.

The next morning a woman from church, whom I barely knew, called me. In disbelief I heard her voice on the phone saying, “I know that you plan to wear an off-the-rack dress for your wedding and I don’t know if that particular dress has significance to you, but God put on my heart last night to call and offer to buy you a wedding dress.” She, could spend $100 for that dress.

That woman was a Saint! We trekked to every bridal store in the area, looking for the perfect dress. Finally, hours later, at a shop that was going out of business, we spied my dress. It was marked down to $25!

We rented a little apartment for the first few months of marriage. Unfortunately, even the $280 monthly rent was too much for our small budget. I began crunching numbers (my first attempt at a written budget) and told Larry that we needed to move.

“Where are we going to find a place cheaper than this?” he bemoaned.

” I don’t know. I just know we will be broke and in debt if we don’t leave here,” I replied. Then I added, “What do you want in our next apartment? Because, I’m fixin’ to pray and I want to be specific.”

“I don’t want an apartment. I want a house,” was his instant, heartfelt reply.

Well, even in 1988, houses cost more to rent than apartments and we were already paying a bargain price. But, I was one determined woman! I sat in that prayer closet and didn’t let up on my “believing wife” prayers!

A few days later, we took a walk and spied the most adorable little white house. It was one bedroom, 1 teeny tiny bath, and 1 closet. No garage. No basement. No appliances. No attic. But, it was ours, for the price of $200 a month!

You notice I said, “No appliances” in my list? I had $150 in the bank and went straight back to God to add an addendum. “Lord, I want to thank you for the nice, new rental house. But, I didn’t realize that we’d need appliances, too. We have $150 for a stove and refrigerator. Thank you, Lord.” Yep! Larry found them both at a garage sale a week before our move-in date. The landlords let us bring them in early.

Part of our decisions are based on where we are in life. When our oldest son was born, we sincerely did not have the money in our budget for disposable diapers. I remember being 8 months pregnant with our first son and sitting on the bed one Saturday morning. “Lord,” I prayed, “you know that we don’t have the money for disposable diapers and, Lord, I’ve looked at the prices of new cloth diapers. Right now, even that seems to be beyond our budget. But, I know that your abilities are endless and you have ways of providing that I haven’t even thought of. So, right now, I’d like to ask you for cloth diapers at a price that we can afford. Amen.”

The very next morning, I opened the Sunday edition of the local paper and flipped to the classifieds section.

One ad jumped off the page at me: “Brand new cloth diapers – 3 sizes – $5 a dozen.” I have never before, or since, seen an ad like this one!

I was the very first person to see the ad and call the number. The lady who answered the phone said that her husband was an over-the-road truck driver. He was carrying cases of cloth diapers and the recipient had refused delivery. The trucking company gave the entire shipment to her husband and told him to do whatever he wanted with them.

I bought ten dozen diapers: 3 dozen small, 4 dozen medium, and 3 dozen large. Other than weekly laundering, my only other expense in diapering was to purchase some inexpensive plastic pants to cover the diapers. That’s it!

I used those diapers for the next five years, at which time I finished potty training my second son.

My point is, God provides what we need when we need it. I needed cloth diapers. There was no other option. So, those diapers were a tremendous blessing to me.

Often, the desires of our children are where the rubber meets the road for us. We feel that we can do without a thing or two, but, boy when our babies have a true heart desire, we want to be sure that they get it!

However, sometimes, it’s better to admit that we cannot provide that for them. When we let GOD step in and work a miracle on their behalf, it’s an experience that will live with them for the rest of their life!

When my second son was about 10 years old he wanted piano lessons, badly! Truthfully, we own a piano and my husband plays. But, it was beyond my husband’s abilities to teach John to play. I looked around and priced lessons. There was no way that it even remotely fit into our budget. But, instead of saying, “I’m sorry, son. You will never be able to have lessons”, I explained that the price was beyond what we could pay, but that GOD knew his heart. We challenged John to pray, seek God, and ask if there was any way that He would provide the opportunity to have lessons.

As soon as John left the room, believe me, my knees hit the pavement. “Lord, this is my baby praying to you. You know that I’ve just assured him that his heavenly Father owns the cattle on a thousand hills and piano lessons are not too much for you. So, I’m begging you to come through for my child so that his faith may be built.”

Day later, one of the instructors I had checked with on pricing, called me. The voice on the other end of the line cheerfully inquired, “I know you asked me about the pricing of lessons. Are you still interested?”

That wonderful lady was adopting four orphaned children. She had noticed the way that my boys interacted with one another. They were polite, caring, loving, gentle.

If they both would come for two hours, once a week and mentor her two adopted sons, then John could have the lessons for free! My oldest son, James, went with his brother, once a week, to provide mentoring for Mrs. Haussam’s sons. He was delighted to get to be a part of helping fulfill his brother’s dream of playing the piano. A year later, just enough money had opened in our budget to allow us to pay for lessons. John’ continued studying with the same instructor for several years.

The look of awe on John’s face was priceless! Over ten years later, John still talks about that moment and he still plays the piano.

I still cry when I tell the story.

Never doubt – and remember to thank Him.

I have often been known to tell my children, “The really good part about being raised without a lot of money is that you have a LOT of stories to tell about God’s amazing grace, guidance, and provision.”

And it’s true! My very best advice to you is: Repeat these stories – again and again.

1 Samuel 7:12 says, “Then Samuel took a stone and set it up between Mizpah and Shen and called its name Ebenezer, for he said, “Till now the Lord has helped us.”

God puts a great importance on the habit of sitting back, reflecting on His goodness, and giving him thanks. So, we should to it – often. But more than that, we should repeat these stories to our children. These are the stories, which they will repeat to your grandchildren and great-grandchildren. You are building your faith and that of future generations of your family.

4 thoughts on “How I Learned to Trust God’s Provision” 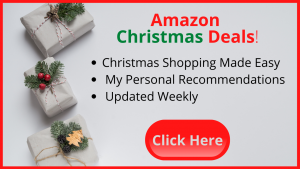 Learn the Secrets of Saving More Money with my Free eBook 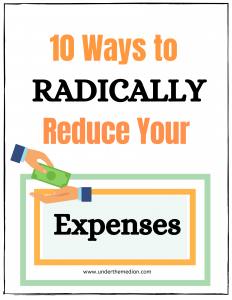 Hi! My name is Hope

Are you ready to transform your family’s relationship with money? I can show you how! My husband and I raised our four sons debt-free, including paying cash for our home on an income which averaged less than $40,000 a year. We help you discover the secrets of spending less, saving more, and living with a spirit of joy and abundance on a budget.