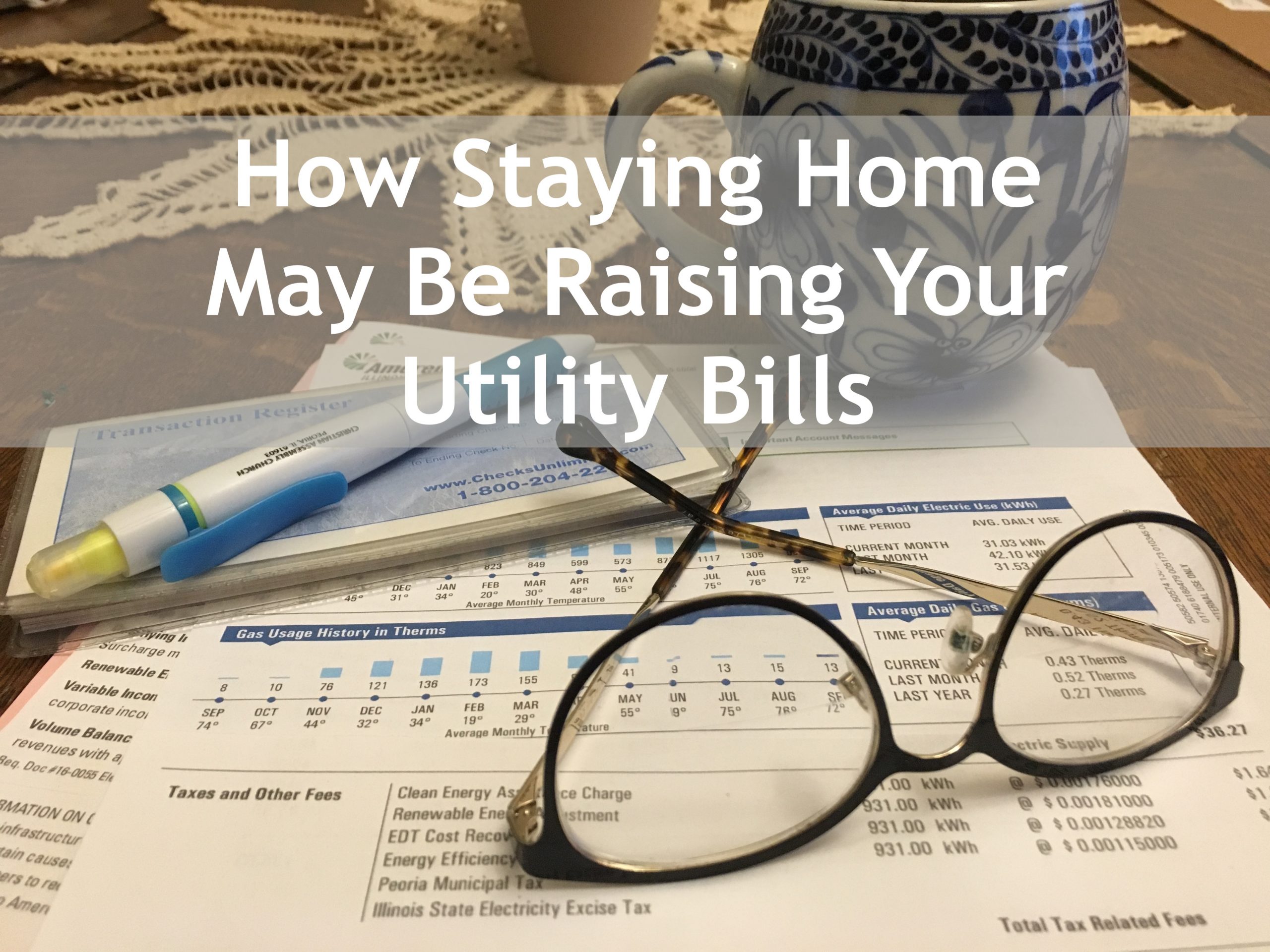 These days we are all fighting COVID-19 with social distancing and staying at home. However, all this family togetherness may be raising your utility bills. There are four habits, which I’ve noticed in my own home in the past four weeks, which directly impact our energy usage.

As I share each with you, I’ll also provide you with several quick, easy, inexpensive strategies, which will help negate any possible budget-busting side effects of our sheltering in place adventure.

For years now, I have researched ways to lower my utility bills. That knowledge is now coming in mighty handy as I strive to keep utility costs under control.

When COVID-19 hit, colleges shut down, leaving students heading for home in a hurry. My oldest son was no exception. Within 24 hours, we packed up his dorm room and reinstalled him back in his former bedroom. Another student, stranded in Illinois, came home with him, too.

Suddenly, we have seven people living under our roof and the piles of laundry have increased significantly. My general eight weekly loads are now more like twelve – or even more.

How to lower laundry costs

#2: Charging Laptops and other Devices

We currently have four students finishing up classes on-line and adults working from home at least part of the time. Our internet is getting a work out!

Not only that, there are laptops, cell phones, and devises on every surface, being plugged into power cords, adapters, and chargers pretty much 24/7.

Americans spend between $75 – $150 a month for electricity, depending on a number of factors, including where you live. Electronics comprise roughly 12% of that bill. The largest source of electric waste is phantom power, also known as vampire power and stand-by power.

Vampire power occurs when an appliance (like your cell phone, appears to be shut off, yet still uses electricity. If your printer is in “neutral” (or sleep mode), then it’s actually still drawing an electric load. The same is true for your television, phone, computer, or any other item which offers a stand-by mechanism.

It seems like a small thing, yet vampire power can suck up to 20% of your electric bill. That’s $19 billion dollars every year in America!

How to lower the cost of charging electronic devices

Smart power strips are a great ally in sucking vampire power out of your life. The smart strip shuts off items automatically, conserving power and lowering your overall energy bill. The more power-sucking devices that you plug into the strips, the more phantom or vampire power you eliminate. Pairing it with a surge protector creates a powerful combination.

Smart power strips will also shut off devices which are fully charged. So, when your computer is at 100%, then off it goes! This is handy in my house when any number of computers and phones are plugged in nightly.

Although these strips also have an internal power surge protector, not all models are created equal. If you are in an area prone to thunderstorms, your best protection is unplugging anything that you don’t want fried by a direct hit.

#3: Leaving on the Lights

For the first few weeks that the kids were home, it seemed like every time I walked into a room, I found the light had been left on in an empty room. Setting aside frustration, it really does cost money to power lights when no one is using the illumination.

Lighting costs account for 12% of the average utility bill. However, in real terms, that means that you could be spending over $200 a year on this one area. Fortunately, it’s also something that is easy and inexpensive to lower.

How to lower the cost of lighting

Your first line of defense is to get the whole family on board. A few years ago, our family made it a priority to turn off lights when we left a room. We had an “energy jar”. If you left a light on, you added change to the jar.

A month later, there was nary a light found left on in the house. However, my husband and I were apologizing to the kids … and paying the bulk of the money. As it turned out, we were more frequently the culprits and not the boys. We called the “energy jar” a success and took everyone out for ice cream on the money from the jar.

I’m actually all about incentives for kids! So, make an energy chart, set some specific reachable goals, and have every family member encourage one another. Then, when you meet a goal, celebrate! Just be sure the cost of your celebration doesn’t cost more than the money you saved on energy.

A second strategy is to replace all of your lightbulbs with LED bulbs.

LED (Light emitting diode) bulbs are the newest (and brightest) contender in the ring and their popularity is rapidly growing. Each bulb is rated to last for 25,000 hrs. of use. They use 75% less electricity than their incandescent cousins.

They use an average of 10 watts. LEDs feel cool to the touch, emitting much less heat, compared to incandescent (90% heat loss) and CFLs (80% heat loss).The size of a grain of salt, each LED is small, but mighty, providing the same light intensity as a standard 60 watt lightbulb.

We have replaced every lightbulb in our home with LED bulbs and in our experience, they really do last longer and cost less to run!

We just got our water bill today. Our water usage was at least a full third more than last month and significantly more than it was a year ago.

When we look at where money is spent on electric bills, your water heater ranks third (14%), while the first two positions are held by air conditioning (17%) and space heating (15%).

We actually pay twice when we use water: in the water bill and in costs to heat the water. So, when we take steps to cut back usage and maintain our water heater, we win – twice!

How to lower your water bill

How to Learn More Lessons about Energy

This is the perfect time for you to take a look at your expenses and learn how to lower them. Thankfully, there are many simple, inexpensive ways to lower your utility costs.