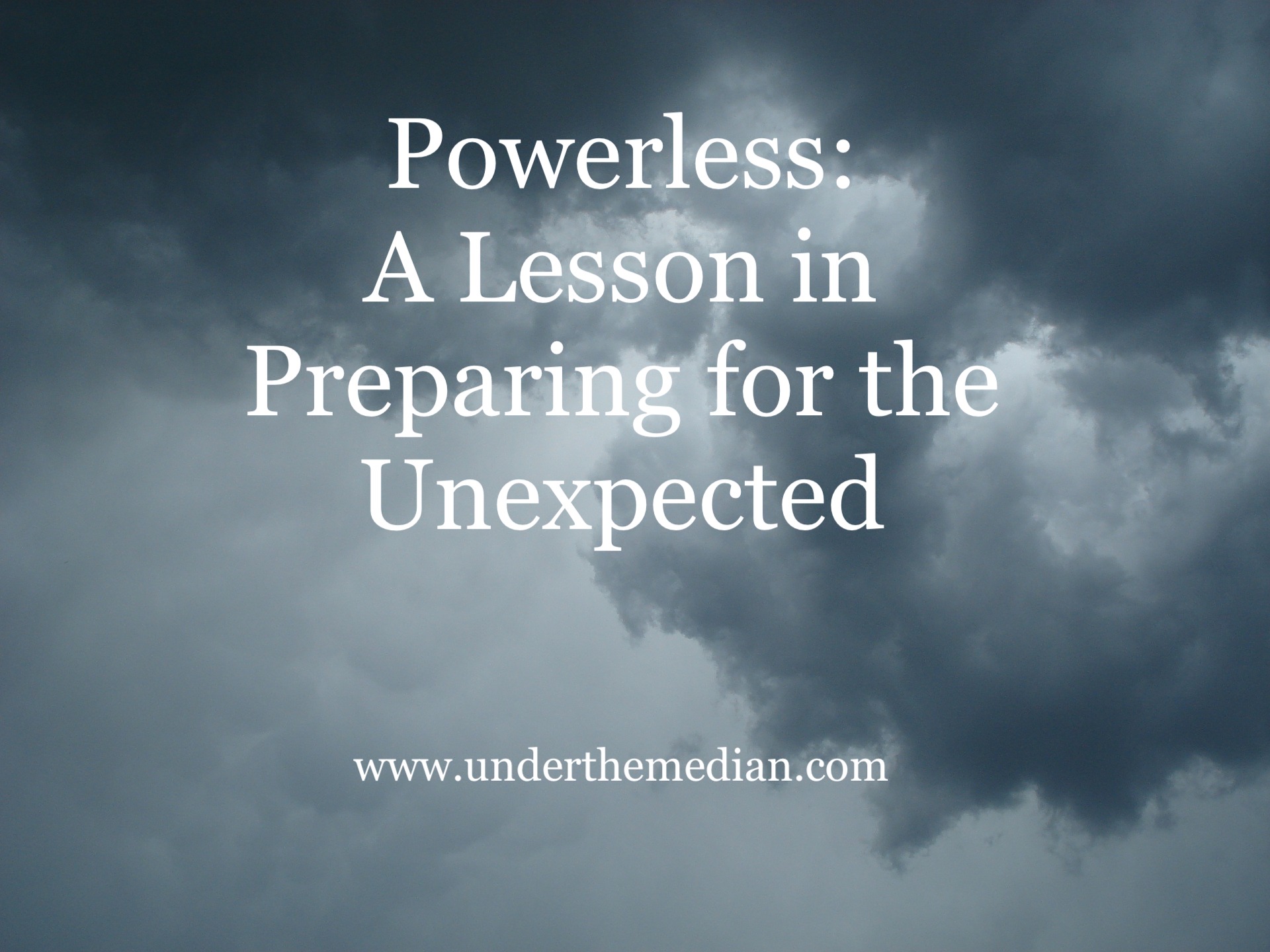 At 2:30 yesterday afternoon we had nearly 70 mph straight line winds. They flattened fields of corn, bent billboard supports in half, and snapped power lines.

Like a giant, invisible hand, the storm sent an aging power pole up the street from my house to wherever it is that power poles go when they die.

Literally minutes before, the skies had been sunny. I was outside, grabbing dry clothes off of the clothesline when dark clouds rolled overhead. In sixty seconds, the winds whipped up with what seemed like gale force. I heard a loud “Boom!” I knew the transformer had blown.

What I didn’t immediately know was the extent of the damage. The storm was incredibly widespread, covering hundreds of miles in a long, wide arc. There were were over 75,000 people in the service area out of power.

This is where my husband’s foresight comes into the story. In 32 years of marriage, he has always been a strong believer in “preparing for the worst”. He has always had things like batteries with power inverters, extra shelf-stable food on hand, and (most recently) a small power generator.

Five years ago, he talked me into purchasing a small power generator at Menards for $300. It is enough to run the refrigerators, some lights, fans, the internet, the sump pump, and a few other items. We don’t have central air, but for all intents and purposes, our life is pretty much going on as usual right now.

For years, I questioned whether all my husband’s precautions were really necessary. When you are living through good times, it’s easy to discount the idea that something will suddenly change your life.

However, as you might imagine, after 24 hours (and counting) without electricity I am currently calling my husband a genius (and he is taking full advantage of his new status to ask me if he can buy a couple of more small emergency back-up items that he’s really been wanting).

Powerless (In More Ways than one)

However, we could control two things:

My husband has invested countless hours in research, clearly defining our needs, finding out what products were available, and narrowing it down to what we could afford.

He prayed and then sought the advice of like-minded friends, people who were also seeking God for wisdom in how to provide for their family’s comfort in the event of an emergency.

Even though we had a generator, auxiliary lighting, and battery backup, if we had not maintained our equipment (testing it regularly) or checked the levels of our supplies, we would not have fared nearly as well.

If we had done nothing, researched nothing, and bought nothing, we would be sitting in the dark right now and throwing out spoiled food.

Our Response to the Warnings

There were muted warnings on the news the morning of the storm. Meteorologists were pretty certain that we were going to see some rain, some wind, and some storms, but they weren’t certain of the force as of yet.

But, then my son had called me ten minutes before the storm arrived. He was just three miles from our home at the library. “Mom, the skies are pitch black here, it’s raining like crazy, and you would not believe the force of the winds. Get your laundry in from the line, now!”

When I looked out my window, I saw nothing but bright sunny skies and not a hint of wind.

If I had ignored the need to act, I would bitterly have regretted that decision. Instead, I listened to the voice of someone I trusted, who was a that moment giving me the advantage of their own personal experience.

Are you prepared for the unexpected?

Life is full of the unexpected. We have certainly learned that lesson from the CORONA virus. No one thought a pandemic would turn our lives (and our finances) upside down.

And yet, it happened.

Likewise, we don’t expect a life-changing medical diagnosis, a job layoff, debilitating morning sickness, or a neighborhood that is deteriorating so quickly that your children’s safety is at stake.

My husband and I have experienced all of these things (and more) in 32 years of marriage.

We have seen God provide over and over for us, while also giving us wisdom in paying off debt, setting goals, and living on written budget.

Raising four sons debt-free on a salary which was consistently under the US median income was not easy, but it was worth it!

Through the years, we learned strategies for cutting money from every single item in our budget. We grew to understand the importance of avoiding debt and creating a list of goals.

However, I would be remiss in not admitting that I actively sought out advice from others who had knowledge that I needed. I read books, implemented strategies, and (as we gained experience and wealth) we paid for the services of a personal finance specialist.

My point is, just like my husband preparing for a sudden power outage, we took steps to learn what we needed and then respond. We didn’t wait until we faced a fiscal storm to come up with a game plan.

You can get my easy-to-follow roadmap.

Now is the time to take action (before an emergency actually happens). It would be my privilege to walk alongside you with the Personal Finance Planner.