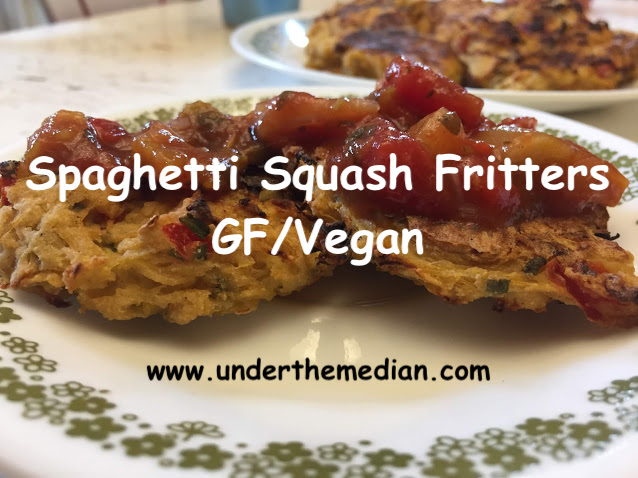 I will admit to you that spaghetti squash was a bit of an enigma to me when I first got it several years ago in a CSA box.  I have tried it several ways and grown to like and appreciate its “spaghetti-like” interior.

Today, I wanted to create a new way to use this versatile vegetable.  I scoured the internet, looking for recipes for spaghetti squash fritters.  I liked the look of some of the recipes, but wanted the dish to be both vegan and gluten free.  So, I ditched the, generally called for, egg and cheese and added red and green pepper, more spices, egg substitute, and gluten free flour.  The result was delicious!

My version should be cooked in a non-stick skillet.  The batter is like a thick pancake batter and perfect for quick cooking in a skillet.

Unwilling to wait for supper, I just devoured some of these with two of my sons for mid-morning snack time.  These fritters got huge, enthusiastic, two-thumbs ups from both boys.  These are definitely going on my “make again list.”

Slice squash in half and remove seeds.  (Reserve seeds and save in a bowl if keeping to roast later)Place squash on a parchment paper lined baking sheet.  Bake at 375 degrees for 45-60 minutes until easily pierced with a fork.  Remove from oven and cool.  Then, use a spoon to remove the flesh and place in a large mixing bowl.

While the squash is roasting, dice the peppers into small cubes.  Saute in a pan with a little water until softened.  Cool and then place into the mixing bowl with the squash.
Mix egg substitute in a small bowl and whisk until frothy.  Add to squash mixture.
Add seasoning and flours.  Mix well.

For each fritter, drop ¼ cup of the mixture into a pre-heated non-stick pan.  About 4 or 5 fritters will fit into the pan at one time. (NOTE:  You could also use an electric non-stick griddle if you’d like – heat to 350 degrees for this option.)   Heat until dry looking on the top and then flip with a plastic spatula.  The bottom side should be nicely browned.  If the bottom is not browned, the fritter will be gooey and won’t flip very well.

Cook on second side until also browned on that bottom.  Remove from pan.  The fritters will be brown on the outside and soft on the inside – much like cooked polenta.

These freeze great for later use. Serve warm with your choice of sauce: marina, mushroom gravy, vegan cheese sauce, or salsa are all great options.